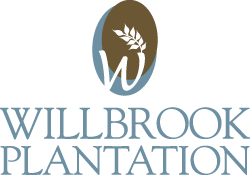 The Dan Maples classic he calls “one of my best” designs, built on the site of two Carolina plantations dotted with historical markers and highlighted by stunning natural elements.

When Willbrook Plantation opened in 1988, golf course architect Dan Maples referred to it as “One of my best”. The ladies seem to agree. In fact, Golf Digest named Willbrook Plantation as one of America’s Top 50 Courses for Women in 2010. Golf for Women Magazine also ranked the course as high as 25 in the US for women. However, all the guys I spoke with describe it to be a challenging layout, as well. In 2006, Golf Digest awarded Willbrook 4.5 stars in their “Best Places to Play.”

Willbrook Plantation is built on land that was once two Carolina plantations, dating back to 1798 as evidenced on their logo. As you make your way around the course, you’ll see several historical markers denoting the various historic points of interest. One tells about the mounding built by slaves in the 1700s that served as the property lines between plantations. All kinds of non-golf related facts that add to the round’s enjoyment.

The golf course at Willbrook Plantation weaves its way through lowcountry marshes, and natural grasses. Along the way you’ll encounter centuries-old oak forests and a blend of wildlife you don’t see at other venues. It’s not uncommon to see the occasional deer, hawk or alligator during your round.

The course is very player-friendly, especially for those that have never played the course. Water hazards that may have gone unnoticed, are marked with large yellow flags, so the “I didn’t know there was water there” defense is no longer valid. Water is very much a part of the action at Willbrook Plantation; you’ll see it in some form or another on at least 14 holes, although it only comes into actual play on about half of them.

There are several holes at Willbrook that could be considered “signature-worthy” but here are my choices:

Most Memorable Hole: Number 6, Par 3, 127 yards (White Tees). A challenging island green gets your attention on this short par 3 hole. A large bunker guards the left side of the green and two grass swales guard the far end, so if you miss the green left, up and down becomes an arduous task.

Favorite Par 3: Number 17, 160 yards (White Tees). This hole may be easier from the back two sets of tees than the forward two, because you won’t have the large tree to deal with. The water in front of the tee should not come into play; if it does, you may want to get a lesson from Head Professional Kevin McGuire. A back pin location will probably require an extra club.

Favorite Par 4: Number 10, 356 yards (White Tees). Remember that Lynyrd Skynyrd song with the line: “Oak tree you’re in my way”? That seems to be the mantra on a number of holes at Willbrook, but none more so than on the par 4 10th hole. Not once, but twice. Off the tee you’ll need to avoid the large oak between the water and the fairway; hit the tree and there is a good chance it’s going in the water. Your best play is down the left side, This takes not only that tree out of play but also the large oak that guards the right side of the green. You’ll just have to clear two greenside bunkers on the left. Your choice: trees or sand?

Favorite Par 5: Number 3, 520 yards (White Tees). Number 3 is both challenging and appealing to the eye. With sand dotting the landscape down the right side, your best play off the tee is up the left. This is easier said than done as Mr. Maples planted a large oak tree near the edge of the fairway, so to maximize your distance up the left side, you’ll need to hit a draw. For the majority of players, this is going to be a three shot hole. As long as you keep your layup shot in the fairway and leave a manageable distance for your approach, you can score well here. A single greenside bunker guards the front left while two grass swales make for an interesting up and down from behind the green.

Pro’s Pick: Number 15, Par 5, 538 yards. A long tree-lined par 5 with a creek running through it that cuts the hole in half. If you’ve been waiting to show off that new draw shot, now’s the time to use it. Any drive landing in the left half of the fairway off the tee is going to provide the best angle into the green. Play your layup shot over the creek, avoiding the two fairway bunkers on the left to set up your approach. You’ll need to fly it on the green to avoid the two front bunkers that guard the putting surface. No wonder it’s rated the hardest hole on the course.

It’s easy to see why Willbrook Plantation is consistently ranked one of the top courses in the Myrtle Beach area. Accuracy is at a premium, especially when avoiding large trees. It’s not the longest course on the Strand, but it is going to make you think your way around it. It’s also very peaceful and serene on the course; I think this is what Mark Twain was talking about when he said, “a good walk spoiled.”

In addition to the course, Willbrook has a great practice area and a grill that is popular with both visitors and locals. In fact, when I asked several players on the course which hole was their favorite, the majority said it was the 19th!

Ready to book your next round at Willbrook Plantation?

NEWS FROM THE TRAIL 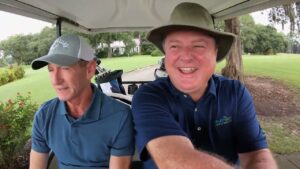 Hank Haney is “Ridin’ with Rymer” at Pawleys Plantation

As seen on “The Charlie Rymer Golf Show” on CBS Sports Network, world renowned swing guru Hank Haney joins Charlie at the Jack Nicklaus-designed Pawleys Plantation Golf & Country Club to discuss a wide range of topics, and to play and showcase some of the course’s signature holes! 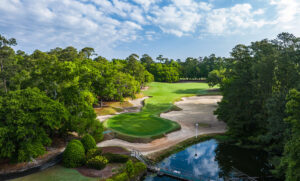 Two Golf Digest writers have weighed in, and made their choices of the top 25 Myrtle Beach-area golf courses you should consider for your next golf trip. It features six Waccamaw Golf Trail designs – one a current member of the publication’s 100 Greatest Public list, three inclusions on its Best in State compilation for South Carolina, and three they’ve selected as “lesser-known gems” worthy of playing. 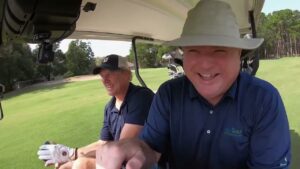 Mark Bryan is “Ridin’ with Rymer” at River Club

As seen on “The Charlie Rymer Golf Show” on CBS Sports Network, Hootie & the Blowfish lead guitarist Mark Bryan joins Charlie at the Tom Jackson-designed River Club to discuss golf and music, and to play and showcase some of the course’s signature holes!