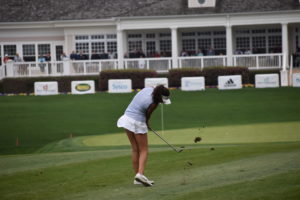 Bhatia finished the tournament 10-under par for a three-day total of 206 breaking the previous tournament record of 211 held by Trent Phillips (now playing for the University of Georgia as the nation’s six-ranked collegiate player and top-ranked freshman). Bhatia also tied TPC Myrtle Beach’s 54-hole tournament record of 206 set in 2007 by Rhys Davies.

Pano’s victory made her the only player, male or female, to win the Dustin Johnson World Junior twice. Just 14 years old, Pano broke her own tournament record of 218 after recording a three-day total of 209, 7-under par.

With a field as impressive as this one, it’s no wonder that TPC Myrtle Beach plays host to these future stars. The challenging layout and pristine conditions at TPC Myrtle Beach make it one of the most appealing aspects of the event that the players truly love.

As one of 12 award-winning golf courses along the Waccamaw Golf Trail, TPC Myrtle Beach is no stranger to high-profile competition as it hosted the 2000 Senior Tour Championship and, later this spring, prepares to host regional competition for the NCAA Division I Men’s Golf Championships.

For this copetition, the course played just under 7,000 yards for the boys and just over 6,000 for the girls to create a Tour-like test for every player.

Johnson, a South Carolina native who’s currently the world’s top-ranked player, is proud to call TPC Myrtle Beach home to both his golf school and his prestigious junior tournament.

During the tournament, Charlie Rymer spent some time with Clay Dubose, regional superintendent with Founders Group International, who oversees course conditions at TPC Myrtle Beach as well as several other Waccamaw Golf Trail courses. Clay talked about some of the steps TPC Myrtle Beach took not only in preparing the course for the premium conditions offered for this year’s competition, but how those preparations are also part of their broader effort to offer a premium experience for all its visiting golfers.

The golf course is in fantastic shape – be sure to include it in your spring Waccamaw Golf Trail getaway!

Ready to Book your next Tee Time or Golf Vacation?